Oh my God, another fucking 20 minute 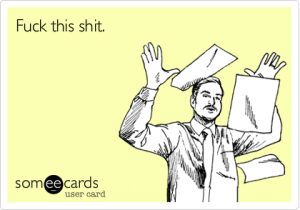 s of talk. It’s been three goddamn weeks. I nearly had a heart attack when something actually happened in this episode towards the end. Kind of. Did their animation budget run out and they decided to skimp on three episodes so they could animate the bullet-time stuff? Geez.

Oh, and of course Death Gun has a melee weapon hidden in his gun…a weapon he crafted, because his rare sniper rifle has a module that allows you to put a crafted weapon in it…and when was this mentioned anywhere in the series? Aren’t there weight restrictions? Can’t the writers stick with the established themes and limitations of a character for one fucking day without having to resort to another surprise or plot twist just to make things interesting and avoid being a tiny bit consistent? Seriously, why not just make it a fucking duel between Death Gun and Kirito based on the capabilities and constraints we’ve seen so far in the past twelve episodes? Is that so radical? Is that so hard?

Hey, Sinon, I have an amazing idea: why don’t you take this opportunity while Death Gun and Kirito are talking and standing still for ten minutes and fucking shoot Death Gun in the fucking head? I mean, why not? You can’t hear what they’re saying; you can’t possibly be distracted or captivated by it, and there’s no way Death Gun can convincingly duel Kirito and dodge sniper bullets from you, but he’s just standing there painting a huge target on his head that you don’t exploit because the writers are focused on BIG REVELATIONS and not thinking about anything else. If the prose in this series were any higher than second-grade, this whole anime would be over by now.

But expect more of the same, kids, because we gotta drag this shit out and milk it as long as possible. God help us if we take risks and challenge ourselves and our material.

(By the way, we have twelve more episodes of this.)