Happy, Nothing of Value, Sword Art Online, TV/Anime, Whatever 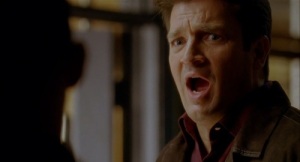 We get it, Kirito Sue the Magnificent: you’re scared. You’re traumatized. You’re so traumatized you’re wielding a giant hammer with “DEEP-SEATED EMOTIONAL ISSUES” scrawled on its hilt and beating all the viewers’ faces with it. So much so it’s kind of lost all of its weight. We don’t care. Why are you so afraid of Death Gun? I would like to remind you that you have conquered two MMOs, one in which you were under worse threat of death, through the sheer power of will.. You have literally willed yourself to ignore the game’s code and do whatever the fuck you want. This has been established and recognized by the games’ creator. You are actually God in this virtual universe for all intents and purposes, but you’re afraid of some guy in a mask. Instead of feeling Kirito’s anxiety, I was just amused and perplexed at how overdramatic he was being for no reason.

Behold! A textbook example on why everyone hates Mary Sues and why they never work. If there is no threat to the character, there is no tension for the viewer to experience, and thus there is no reason for them to become invested in what they are perceiving. These are some of the most foundational pillars of Human Storytelling. We are emotional creatures; stories are ways for us to share those emotions with one another. Nobody wants to see fucking Frodo waltz his way into Mordor on the Eagles’ backs; they want to see him carry it into Mordor, risking life and limb with no thought of himself, while his friends defend the free world at great risk to themselves. Kirito never experiences any real obstacles, only “challenges” we are commanded to take seriously by various elements of the show. Sword Art Online is high-school-level storytelling at best, but it’s gotten so popular because otaku and Japanophiles eat this shit up. We’re only five episodes removed from Episodes 2 and 3, and already everything is just boring. Here’s an idea: get rid of Kirito and go back to Episode 2 where Sinon was engaging in sniper duels with opponents that challenged her. That’s the part of this episode I enjoyed: watching Sinon do her thing like a real, legitimate character. Whenever Kirito shows up my eyes just gloss over because I already know what’s going to happen.

Surprise me, Sword Art Online II. You did it in Episodes 2 and 3. I’m sure you can do it again somehow.